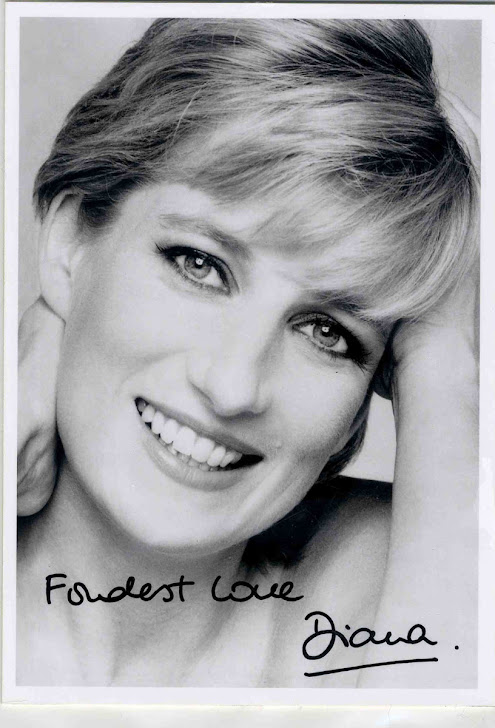 Annie Machon : Machon Has Been Discribed As A Disinformation Agent - Only You Can Decide.

Uploaded by TheFlexEffect on 15 Jul 2011
Princess Diana was going to start campaigning for Palestine, according to Annie Machon. Annie Machon is a former MI5 officer who blew the whistle on a false flag operation. She was involved in surveillance of Princess Diana and would obviously have unique insight into the methodology of the intelligence services. Her views are well worth listening to.
Posted by SteelMagnolia at 2:53 AM

A controversial documentary delving into the details of Princess Diana's death will not see the light of day in the United States or Britain.

The film, "Unlawful Killing," directed by Keith Allen, claims the princess and her boyfriend, Dodi Al Fayed, were murdered in a plot involving her former father-in-law, Prince Philip. The movie was financed by Dodi Al Fayed's father, Mohamed Al Fayed, who has always believed the deaths were suspicious and not an accident.


Dodi and Diana were killed while speeding through a Paris tunnel on Aug. 31, 1997.
http://news.yahoo.com/blogs/lookout/controversial-princess-diana-film-dropped-193536038--finance.html

Posted by SteelMagnolia at 7:59 AM

Princess Diana : The Documentary Unlawful Killing Has Been Shelved.

Unlawful Killing, directed by Keith Allen and funded by Diana's partner Dodi Fayed's father, Mohamed Al Fayed, was screened at Cannes last year, though it was not part of the official festival. It alleges that "dark forces" within the British establishment worked to cover up the true details of Diana's death in 1997.


Producers admitted last year that lawyers had warned them to make 87 cuts if they wanted to show the film in Britain, but the makers had hoped to show the film in the US and other territories to coincide with the 15th anniversary of the deaths of Diana and Dodi in a Parisian tunnel. Unfortunately, insurers have baulked at the prospect because US distributors might have faced litigation through their UK offices.


"Unlawful Killing has been sold all around the world," a spokesperson for the film told the Sun. "But there was a specific form of insurance needed by the US distributors to cover them for their French and UK offices. This proved impossible to secure. The film has been withdrawn in perpetuity."

The move will presumably disappoint Al Fayed, who has long argued that the circumstances surrounding the death of his son and Diana were suspicious. He is reported to have put up the film's entire £2.5m budget and was said to be "delighted" at the results, though Allen argued in a Guardian article last year that the documentary was independently conceived and had not been altered to fit the worldview of its benefactor.

As one Diana movie fades into the dust, so another raises its head above the parapet. The first pictures of Naomi Watts as the princess in the upcoming biopic Diana have hit the internet. The Australian actor plays Diana in her later years in the film, previously known as Caught in Flight, which is being directed by Downfall's Oliver Hirschbiegel, best known for his acclaimed drama about the last days of Hitler in his Berlin bunker. The film centres on the princess's relationships with heart surgeon Dr Hasnat Khan (played by Naveen Andrews) and Dodi Fayed. It is scheduled for release next year.

Posted by SteelMagnolia at 7:32 AM

Caught In Flight Starring Actress Naomi Watts - Propaganda Movie To Distance The Public From The Facts.

With immaculately coiffured blonde hair and a stylish colour coordinated outfit, she bears an uncanny likeness to the woman she is portraying.
New pictures have revealed how English actress Naomi Watts has captured the look of Princess Diana in a film about the last two years of the tragic royal’s life before her death in 1997.
Miss Watts, 43, who has previously starred in Hollywood films such as 21 Grams and King Kong, was spotted in the UK filming scenes for forthcoming production Caught In Flight, which is released next year. Seeing Diana: Naomi Watts bears an uncanny resemblance to the late Princess Diana as she stepped out in character for her role in new film Caught In Flight Magic of make-up Miss Watts insisted that she looked nothing like Diana, seen right in Angola in 1997- but the film's make-up artists have certainly done their job

The film is thought to focus on her relationship with heart surgeon Dr Hasnat Khan and also looks at her time with Dodi Fayed, who she was with at the time she died. The movie will include her death, aged 36, in a car in a Paris tunnel in 1997 with Dodi.

Miss Watts, who at the start of her career starred in Australian daytime soap Home and Away, has admitted she is ‘absolutely terrified’ of playing the part of the princess.

The Oscar-nominated acress has said of her controversial new role: ‘’She is a part of our history, an incredible woman and fascinating but a tragic ending.

Sombre: Naomi was dressed in all black as she was seen leaving a building in character, and right, seen recently at Elton John's White Tie and Tiara ball


‘The film-makers came to me and it’s a good script and it’s very scary and I kind of wanted to say ‘no’ but I couldn’t.’

Miss Watts moved to London’s Kensington to prepare for the role and was said to have visited Diana’s favourite places -such as The Harbour Club and Beauchamp Place - as part of the preparations to get into character.

Her co-star Naveen Andrews, who plays Dr Hasnat Khan in the film recently, suggested Miss Watts is the only actress able to play the princess. Scary: Naomi was impressed with the script but admits she found the prospect 'very scary'

The Lost actor said: ‘I don’t think anyone else could have done it - there’s no one else.’
He added: ‘Whenever you work, usually if something has a chance or the potential to be good it usually starts with a good script and I’m very happy with the script and Naomi is doing it and she’s wonderful... I’m very much looking forward to shooting.’

The film is being made by acclaimed German director Oliver Hirschbiegel, who is famous for his portrayal of the last days of Hitler in his bunker in Downfall.

He reportedly said that Miss Watts was ‘a truly exceptional actress’ who embodied ‘the warmth, humanity and empathy’ of the ‘global icon’ Princess Diana,

Miss Watts, who had previously been in a relationship with Heath Ledger, is currently with actor Liev Schreiber, with whom she has two sons. Serious: Acclaimed German director Oliver Hirschbiegel, famous for his portrayal of the last days of Hitler in his bunker in Downfall, is taking the reins of the film

Princess Diana : Brainwashed - Image To Make You Believe Diana Was Trapped Inside The Mercedes And a Gagged Witness Erik Petel Who Can Prove She Wasn't.

This was how the Mercedes looked after the accident. However, the world was told Diana was trapped inside the car and the image flashed around the world was not this... 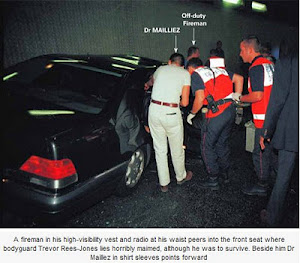 
Erik Petel,  first witness on the scene moments after the crash was not asked to give evidence at the inquest for the simple fact the lie told to the world would have been exposed.  The delay in removing Diana from the car (the official story we have been told) was that she was trapped inside. Petel, when he rushed over to the Mercedes saw a woman draped over the front seat of the car ( the impact of the crash had thrown Diana forward from the back seat ) he tried to help her sit up and noticed blood oozing from her nose, at this point he had no idea who she was.......If Petel managed to pull Diana into a sitting position then she was not trapped inside the car and the cutting open of the vehicle along with the images flashed around the world were mere theatrics for us to understand how no one could possibly survive such an impact .

Posted by SteelMagnolia at 12:51 PM

Posted by SteelMagnolia at 12:46 PM 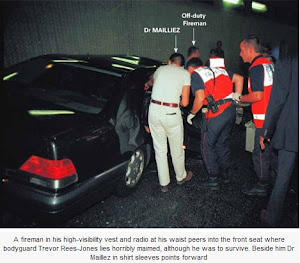